Tripawds Supporter sites have no ads!
Skip to content

Sebastian has been a tripawd and cancer-free for THREE YEARS! WOOHOO!

OK, now that the celebrating is over, here’s the real reason for my post: Sebastian is looking for work. I’m not sure he knows it yet, but I’ll be sure to keep reminding him. He needs to pay off his vet bill!!! So who’s looking for a mouser? He might only be able to chase at 75% speed but I can assure you that he’s got the skills. 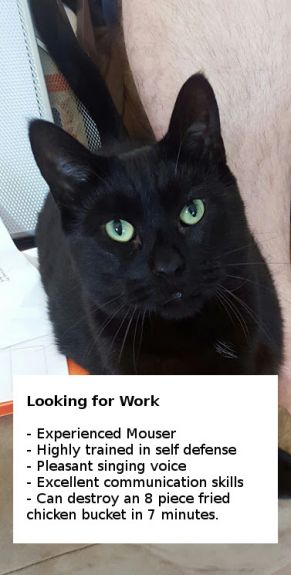 Just kidding. He’s retired. (Unless there really is a job out there!)

Sebastian is currently sleeping in my office (in the dog’s bed, of course) while he recovers from surgery. For the past month or two he has been having the dreaded male cat urinary problems, and it got real bad. He had 3 blockages in a week, had a catheter placed each time, and ultimately failed to stay unblocked. He had PU surgery to hopefully “cure” him. The vet calls it the sex change surgery. I guess I can finally say I have a little girl? Sorry. 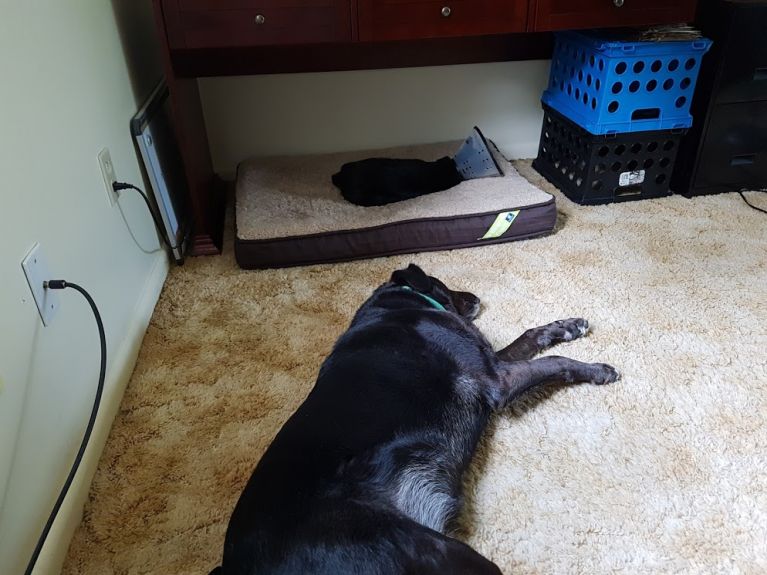 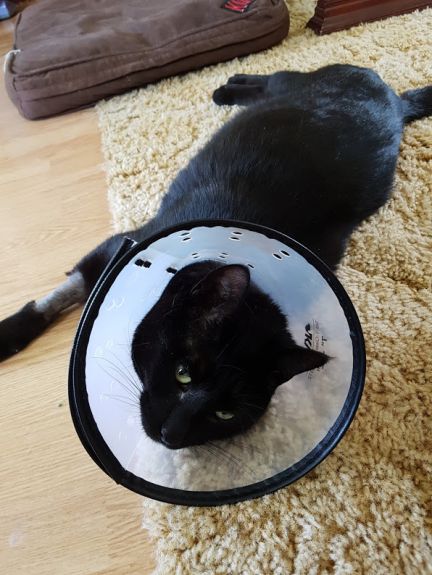 The silver lining is that I’m pretty sure Sebastian can live through anything. But let’s not test that theory anymore!


To remove ads from your site and others, upgrade to a Tripawds Supporter blog!

I totally missed Sebastian’s 2 year ampuversary! It was March 17th (St. Patty’s Day). I have a good excuse though, I promise. My excuse is…HE’S SO NORMAL!!

Yeah he has a limp, and I do enjoy teasing him and asking him if he lost his leg in an epic battle, but other than that…he’s a super friendly, chatty cat (with the occasional lovable bad attitude).

Also, Sebastian had his senior wellness visit a couple days ago. All is well! And he’s just barely a senior. He’ll be 9 this year.

I guess I should answer a question that is probably now being asked, since every person that enters my house asks it: Why are your animals drinking Orange Crush in their fountain? Because if you leave a clear bottle of water out, Sebastian bites a hole in it. No joke. Fortunately it only took one kitchen flood to figure that out.

Halloween is Sebastian’s favorite time of the year. Well, not really, but we can pretend! We asked Grandma to make Sebastian a costume and it ended up AMAZING!

In order to achieve these photos, which aren’t even that great, we had to bribe him and distract him with food. We also had to get the pictures quick because he was mostly interested in eating and attacking the peg-leg. 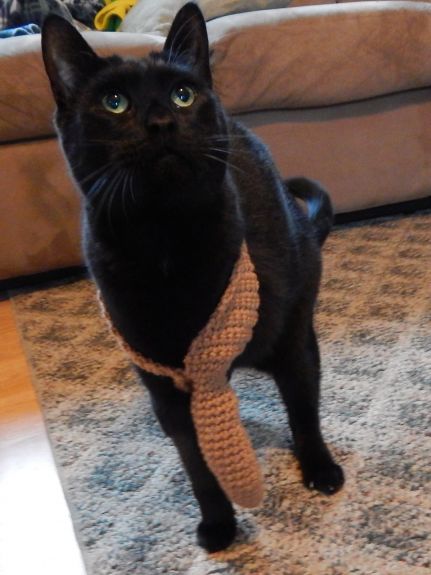 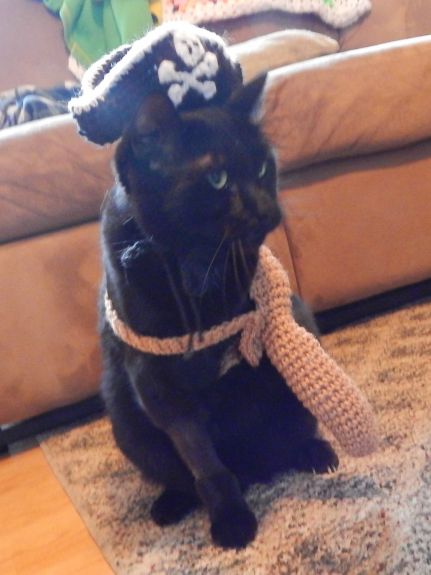 Before we tortured the poor kid, we took some nice photos. Sebastian is difficult to photograph for so many reasons:

So once he stopped demanding attention, he realized what we really wanted: super cute poses, DUH! 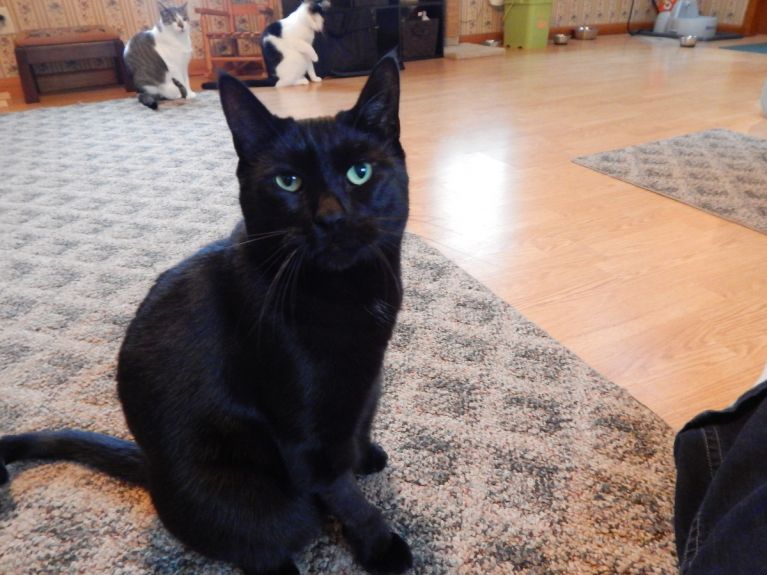 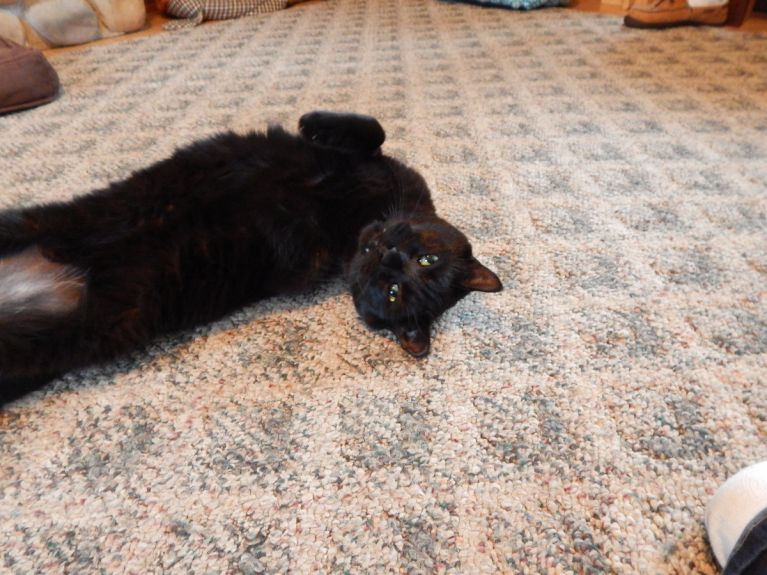 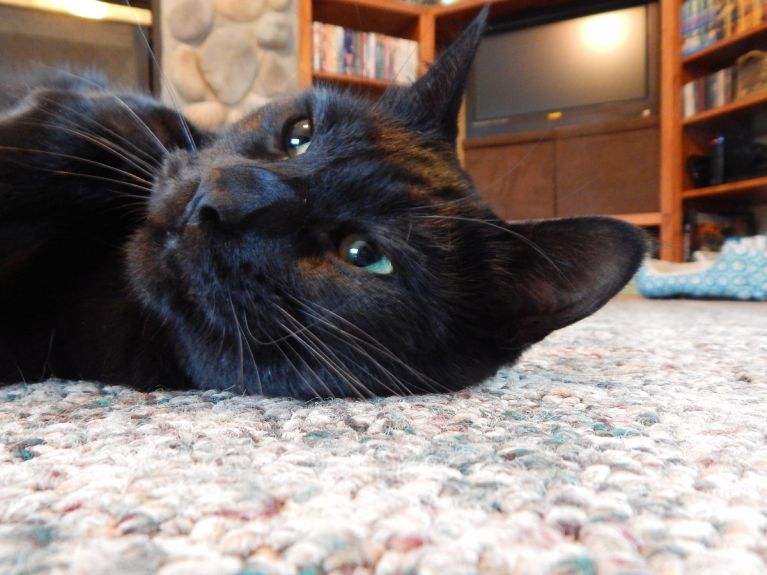 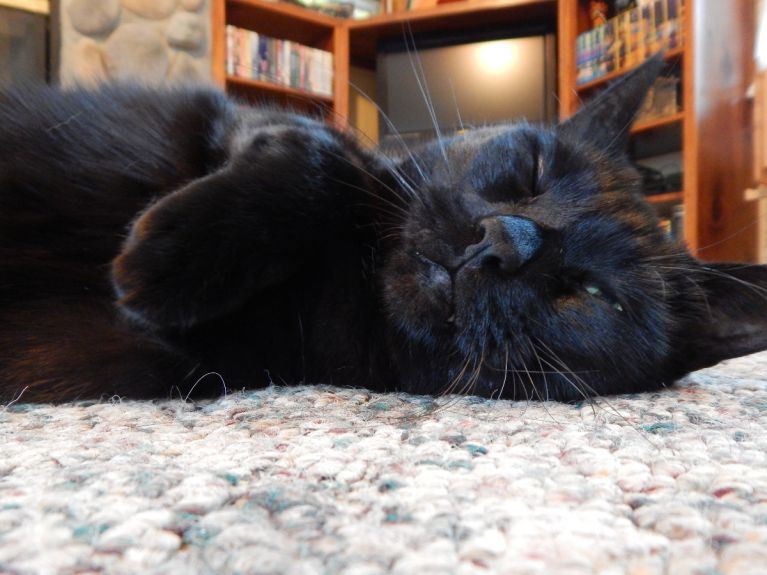 You may notice in some of these pictures that Sebastian’s front leg is shaved. Why, you ask? Well, I did say that Sebastian likes attention. A few weeks ago we had to rush him to the emergency vet because he couldn’t go #1 and was feeling really terrible. He was crying a lot and it was absolutely heartbreaking. He also wasn’t attacking the vet which is the #1 sign that Sebastian is SICK! Fortunately the vet was able to fix him up and Sebastian was back to screaming, hissing, and growling in no time! Mom & dad are going to go broke and have a few more gray hairs, but we’ll do anything for our furry children!

Anyways, have a HOPPY HALLOWEEN everyone!

Sebastian and his bros have a new house, with plenty of window sills for everyone. 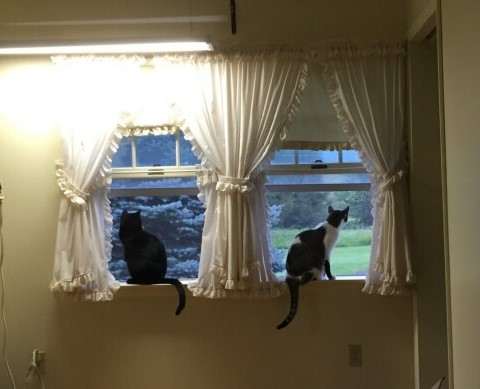 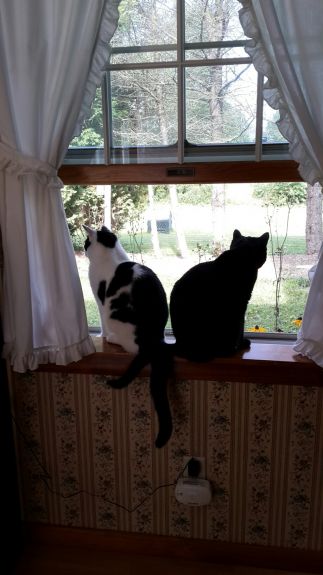 Sebastian is also looking forward to some cooler weather so he can thoroughly enjoy his new fireplace. 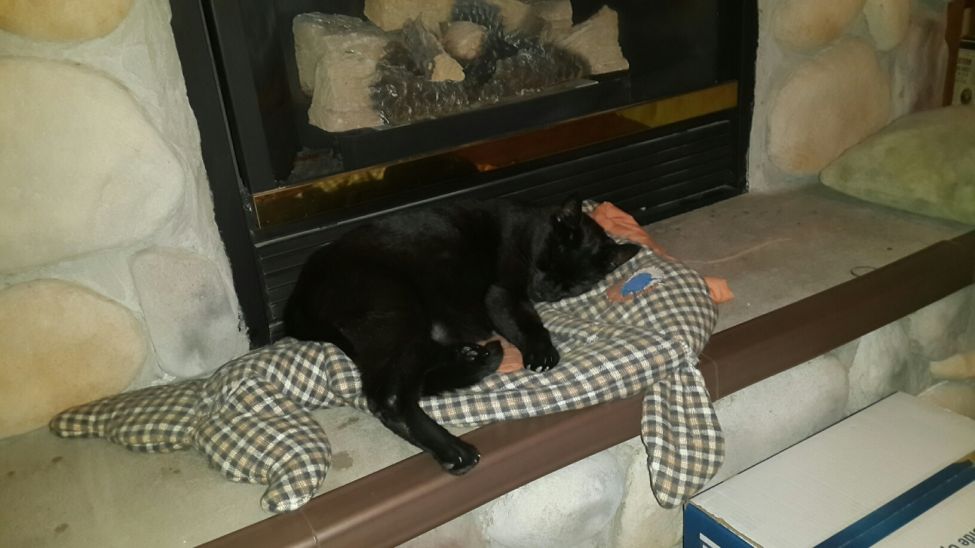 Lastly, we have made it to the 1 1/2 year mark with a clean bill of health (as of yesterday). Sebastian sends his love (and angry glares?) to everyone!

I know Sebastian & I have been pretty absent from Tripawds lately.  I’m sorry.  Everything is going great, just super busy!  We’re in the process of moving to a big house out in the country, among other things.  Best wishes to everyone out there!

I leave you with a game titled “Find the Sebastian” 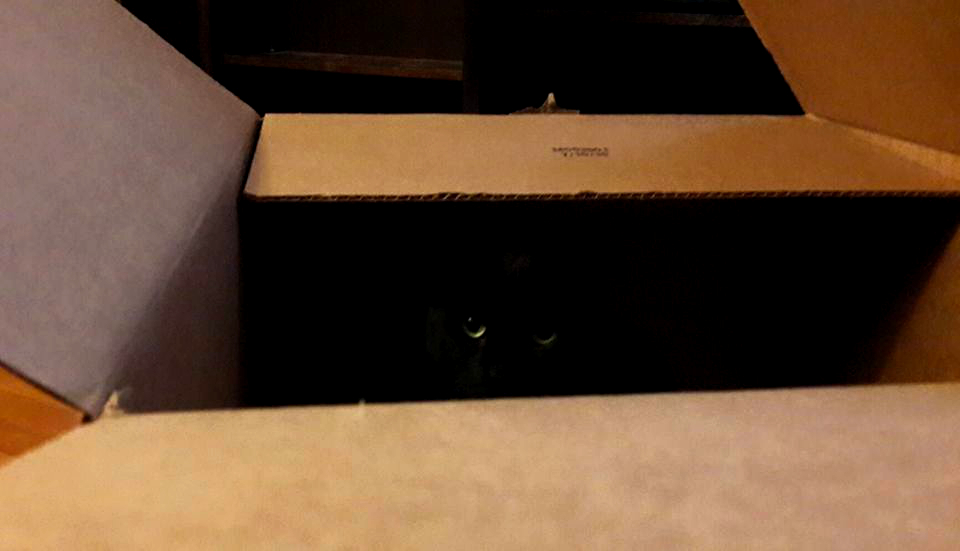 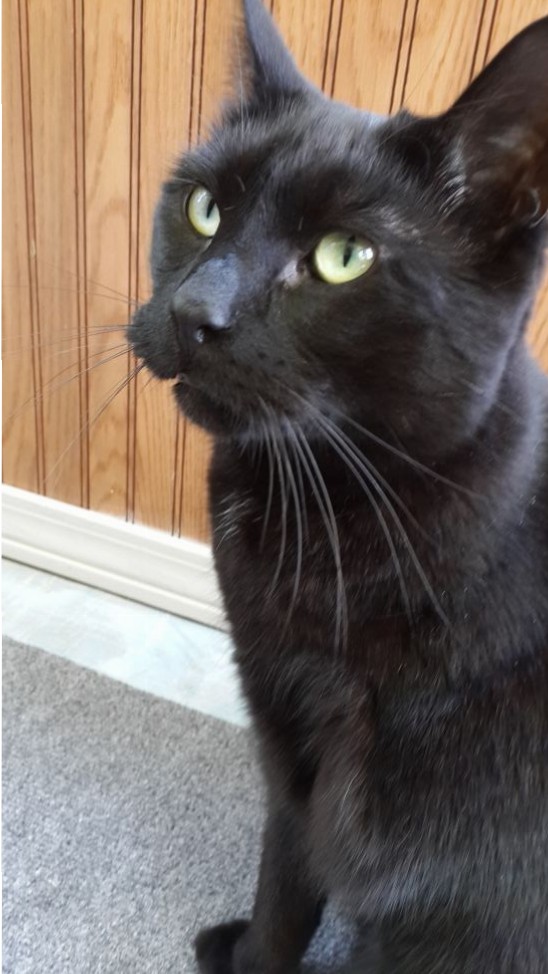 I have been meaning to give you all a quick update on how Sebastian’s vet visit went, 1 year post amputation. I’ve been slacking but I’m here now!

Sebastian still hates the vet. No question about it. He gets really loud and flails a lot when I put him in his crate, but he’s a lot easier to capture now. Poor guy, he’s so scared. But he did great, didn’t hurt anyone, and came out with a mostly clean bill of health!

The vet tech had to put a muzzle on him (I think he scared her…he’s still got some spunk, I’m tellin you) and I guess that helped a lot. Then the doctor decided to be brave and check his teeth. They were awful…probably haven’t been checked in a couple of years because he’s so bad at the vet.

So Sebastian got to go back the next week for a teeth cleaning! A drugged up 3 legged cat is something else…I wish I took video. But now his teeth are sparkly white, his breath is so much better, and all is well! 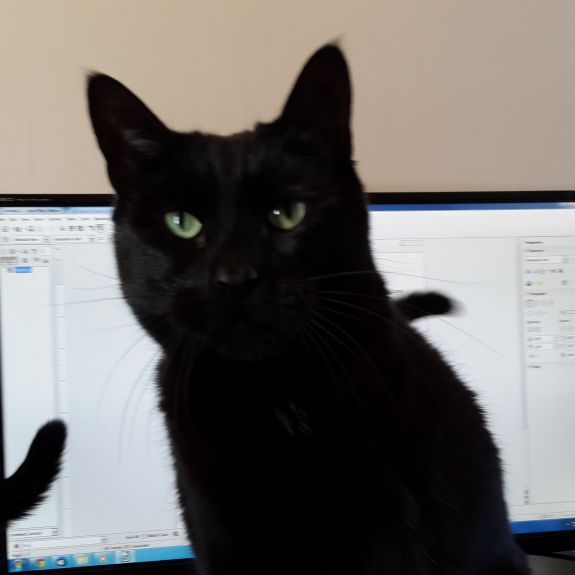 I really wanted to get a video of Sebastian playing with one of the feather toys so everyone can see how great he’s doing, but of course every time I turn the camera on he just sits there. Check out what happened this time. 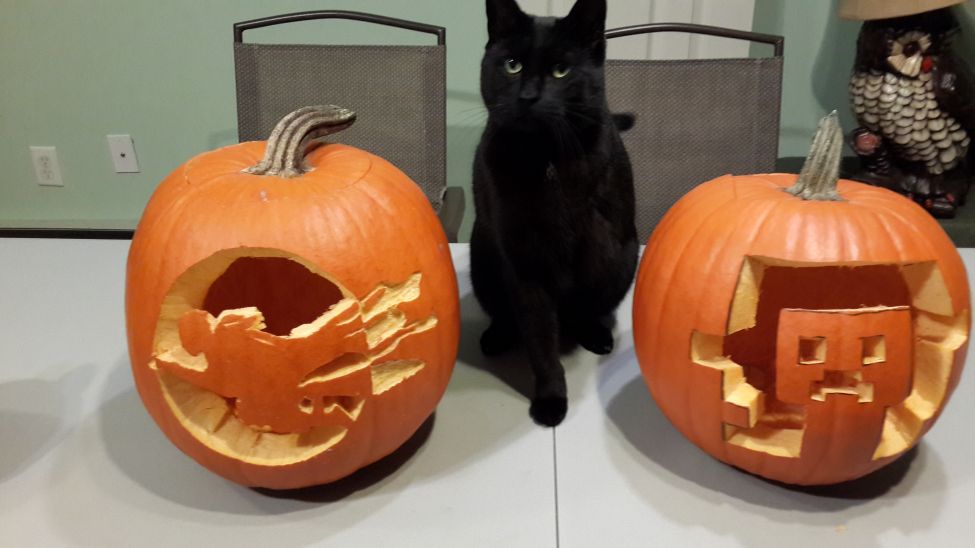 
Tripawds Supporter sites have no ads!