It’s been two weeks (well, almost) so we have finally let Sebastian out into his room (empty of anything to jump on).  He is THRILLED! He hopped right out of the crate and walked a few laps around the room.  Then he rolled around on the floor for a while, in true Sebastian style. 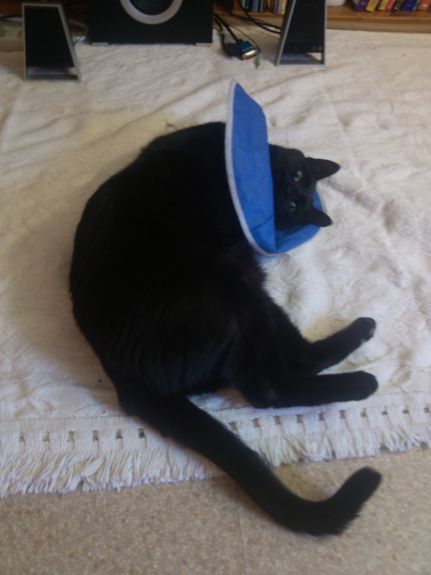 Even after an hour or so you can tell that his walking (or hopping) is getting better.  He can also move pretty fast when he wants to (is that a treat in your hand!?).

In other news, we have been having a lot of trouble getting him to eat this past week.  I finally called the vet and found out it is likely because of the antibiotics (Clavamox).  Per some advice from people on this site, we tried tuna juice and chicken baby food.  He really liked the baby food by itself but didn’t eat a lot when I mixed it in with his food.  Pretty much every day he takes a few bites and calls it quits, no matter what he is fed.  But it’s getting better…he was eating nothing, then very little, then a little more.  We’ll see how it goes.  Hopefully he will eat more now that he is out and about.

Now if only we could take that stupid collar off…

One thought on “FREEDOM!!”